by Ram
in UPSC

Download NDA 2021 Hall Tickets @upsc.gov.in : UPSC NDA Admit Card 2021 (I & II) will get released on the official website of the Union Public Service Commission. In general, the admit card will be released three weeks before the written test.

UPSC NDA II admit card will be released by the last week of October 2021 for the exam to be held on 14th November 2021. Candidates should know their Registration ID (RID) and DOB or Roll Number and DOB to download the e-Admit Card.

Candidates can check the official website of UPSC around the first week of April 2021 for NDA I admit card 2021 and the exam is to be held on 18th April 2021.

Based on the previous NDA and NA exam, the current year admit card will be released three weeks before the date of the test. So, for the NDA and NA (I) 2021, candidates can expect the release of Admit Card to happen in the last week of April 2021. In the same way for the NDA & NA (II) 2021, they can expect it to happen in the last week of October 2021. 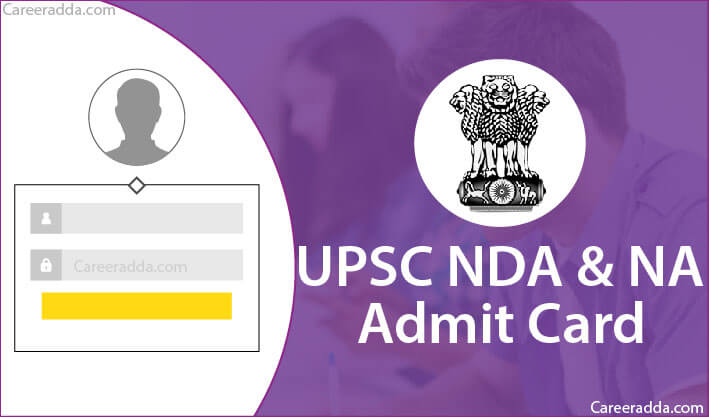 Candidates can download the e-admit card for NDA & NA 2021 by following the process given below:

The UPSC NDA and NA 2021 Admit Card will have the following details:

Before they download the e-admit card, candidates should make sure whether these details are related to them. In case, by mistake they have got the admit card for some other applicant, they should inform the same to the commission immediately. They should not carry other’s admit card to the test center.

Information on where to contact in the case of issues with the admit card can be obtained by the candidates from the facilitation counters located at the office of the Union Public Service Commission in person or by phone. The phone numbers are 011-23381125/011-23385271/011-23098543.

Instructions To Be Followed

Candidates should bring only the Admit Card to the test center. In the case of a candidate, whose photo is not clear on the e-admit card, the candidate should bring a valid photo identity along with the admit card along with two passport size photographs. The accepted photo identities are a Voter ID Card, passport, driving license, Aadhaar card, or any other valid card.

Q. Will, I Get The E-Admit Card For UPSC NDA & NA To My Postal Address?

A. No, you will not get it delivered to your address. You will have to download it and you will alone be responsible if you do not download it. You are recommended to download it at least a week before the date of the test.

Q. What If My Admit Card Is Not Available?

A. In case, your admit card is not available online even a week before the test, you should contact the UPSC.