Check UPSC CDS Results 2019 : UPSC CDS (I) result 2019 will be announced on official website. CDS written examination result will be announced on UPSC website and final result after SSB Interview will be released on the same website. UPSC CDS (I) Exam is going to be conducted in the month of February by the Union Public Service Commission. It is expected that the result of written exam of CDS I will be released in the month of May or June 2019 and Final result will be declared after July 2019. 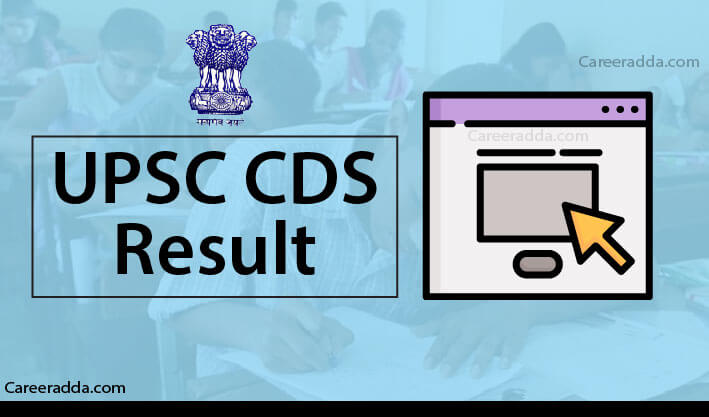 UPSC CDS 2019 written results will be released by UPSC on its official website @www.upsc.gov.in after the successful completion of Written Examination. Candidates who qualify the written exam conducted in pen and paper mode exam shall be considered eligible for the Officer Intelligence Rating test and PPDT followed by the SSB interview. Final list of selected candidates based on merit, subject to medical fitness will be released by SSB on UPSC website.

UPSC CDS I written exam is soon to be conducted on 3rd February 2019. The Written Exam will be an offline pen and paper exam. The written exam will consist of three sections for the Indian Military, Indian Navy and Air Force officer’s category candidates namely English, Elementary mathematics and General knowledge and two sections namely English and General Knowledge for the Officers Training Academy category candidates. Each section will comprise of 100 questions and the duration for each section will be 120 minutes i.e. 2 hours. After the exam is conducted, UPSC will release the result of the written exam in the form of a PDF file that consists of the qualified candidates roll numbers for SSB interview round. Candidates have to register themselves online on the army recruitment official website which is www.joinindianarmy.nic.in exactly within two weeks after the results are announced.

The next stage prior to the written exam is the Stage 1 of the SSB interview which is the Officers Intelligence Rating test followed by a Picture Perception and Descriptive test. After the successful completion of this stage, the commission releases the result of this stage listing the candidates who have cleared this round and have been selected for the SSB 4 day interview.

The Stage 2 of the SSB interview involves a 4 day program involving a Psychological test, Group tasks, Personal Interview and Conference.

After the completion of all these stages and document verification and a due medical examination, a final merit list will be released in the form of a PDF file that includes the name and respective roll numbers of the final selected candidates. The candidates are selected depending on various factors such as minimum cut-off set by UPSC in written test, marks scored by candidates in the various stages of SSB Interview, availability of vacancies, etc.

How To Check The UPSC CDS Written Exam Result?

UPSC CDS result 2019 for the written will be released by UPSC on its official website in due time after the commencement of the exam. The steps to check the result and download it is as follows.

UPSC will select the candidates based on merit in the written test and forward the list to the SSB of Army Headquarters for further Process. After interviews, UPSC will release final result of CDS (I) in a pdf on its official website. The final list contains the Institute wise qualified candidates roll numbers and names of the candidate. Final result is provisional and allotment to the concerned post will be subject to medical examination along with document verification. Follow the below mentioned process to check final result of UPSC CDS (I):

Documents To Be Forwarded

Final selected candidates must forward their education certificates and DOB certificate as claimed by them, in original along with Photostat attested copies to the preferred academy of their first choice. In case of any change of address of the candidate, communicate it directly to the concerned Army/ Naval/ Air Headquarters.

The UPSC CDS cut off for written exam of previous years has been mentioned below.